Fantastic news that James Halliday has again awarded our winery four and a half stars in the 2021 Wine Companion. Our 2018 CMT (Cabernet-Merlot-Tannat) was awarded 92 points and our 2019 Daily Red Shiraz 89 points.

Fantastic result for our 2018 Shiraz Viognier at the 2019 RASQ wine show, receiving a gold medal and the trophy for the best Queensland Mediterranean Red. Also great to get a silver medal for our CMT.

We are proud to announce the opening of our self contained cabins in the vineyard.

See vineyard stay on the menu bar for details. 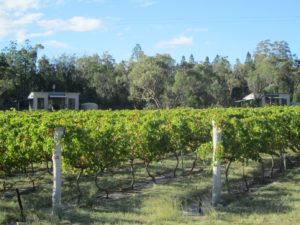 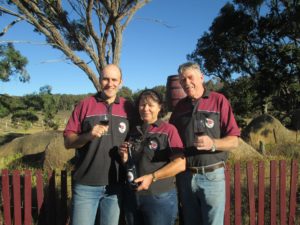 We knew our 2015 Shiraz Viognier was pretty good and weren’t surprised that it received a gold medal. But to gain the trophy for the best Queensland Wine was a pleasant surprise and is icing on the cake.

Another great result for Just Red Wines at the 2017 RASQ wine show in Toowoomba. We were awarded two silver medals: one for our latest release of 2016 Tannat and another for our 2016 Daily Red Shiraz. Our 2015 Shiraz Viognier was also awarded a bronze medal.

Our 2015 Tannat has won yet another trophy. This time it was the Champion Alternative Variety Red Wine at the 2016 Queensland Wine Awards. As well as a gold medal for the Tannat, our Shiraz Viognier 2015 and Cabernet Merlot 2015 also were awarded bronze medals at this event.

A silver medal for our 2015 Shiraz Viognier at the 2016 Royal Queensland Wine show is a fantastic result. We believe that Shiraz Viognier has great potential here in the Granite Belt. Our first two vintages of this great wine have both done well at the shows and have been well received by our customers.

Our 2015 Tannat has received a second trophy. This time for the best Queensland Red in Show at the Cairns Wine Show.

We are excited that both our 2015 Tannat and our 2015 Cabernet Merlot have been awarded gold medals at the 2016 RASQ wine show. Our 2015 Tannat was also awarded the trophy for the best non Mediterranean Red.

Its especially pleasing to get gold for our Tannat when it was only our second vintage of the variety and our first Tannat in 2014 also did very well for us including 94 points from James Halliday.

The gold medal for our Cabernet Merlot 2015 was also fantastic. It was our first Cabernet Sauvignon vintage and we decided to blend it with Merlot which has resulted in an elegant and complex wine.