A silver medal for our 2015 Shiraz Viognier at the 2016 Royal Queensland Wine show is a fantastic result. We believe that Shiraz Viognier has great potential here in the Granite Belt. Our first two vintages of this great wine have both done well at the shows and have been well received by our customers.

Our 2015 Tannat has received a second trophy. This time for the best Queensland Red in Show at the Cairns Wine Show.

We are excited that both our 2015 Tannat and our 2015 Cabernet Merlot have been awarded gold medals at the 2016 RASQ wine show. Our 2015 Tannat was also awarded the trophy for the best non Mediterranean Red.

Its especially pleasing to get gold for our Tannat when it was only our second vintage of the variety and our first Tannat in 2014 also did very well for us including 94 points from James Halliday.

The gold medal for our Cabernet Merlot 2015 was also fantastic. It was our first Cabernet Sauvignon vintage and we decided to blend it with Merlot which has resulted in an elegant and complex wine.

It was great to see a silver medal awarded to our 2014 Shiraz Viognier at the 2015 Queensland Wine awards. It was also awarded four stars in the subsequent Winestate magazine tasting as well as being top in its category. Our very reasonably priced 2014 Daily Red Shiraz also received a bronze medal at these Queensland Wine Awards. 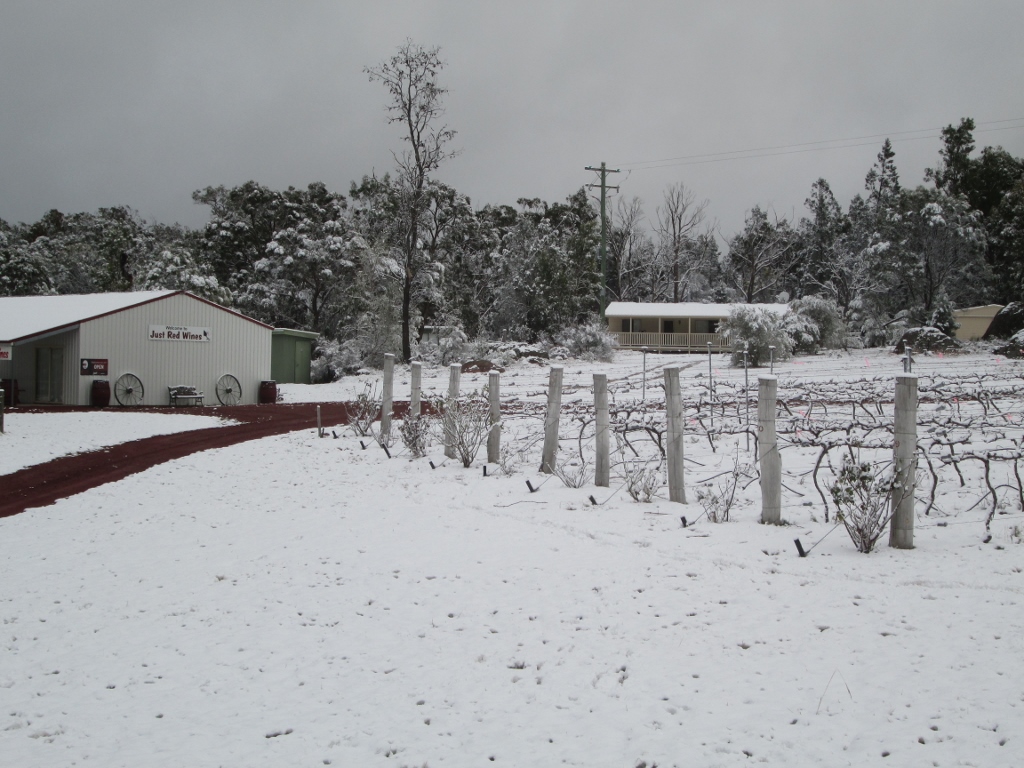 Snow fell throughout the Granite Belt on 17th July 2015 and we had our fair share. About 10 cm fell in the early hours of Friday morning turning the vineyard into a winter wonderland.

James Halliday has awarded our 2014 Tannat with 94 points meaning “Outstanding. Wines of the highest quality….”

We knew we had a great wine with our Tannat, but its nice to get praise from the highest respected commentators.

Our 2014 Tannat has been awarded a silver medal in the 2015 RASQ Toowoomba Wine Show. It was also awarded the trophy for best Queensland non Mediterranean Red. Bronze medals also went to our popular 2014 Shiraz Viognier and our very reasonably priced 2014 Daily Red Shiraz.

To provide greater flexibility to our valued visitors’ club members we now have an option to purchase online at discounted rates. In our quarterly emails we will provide you with a coupon code which will give you 20% discount on normal online prices. If you are not already a member of our visitors club please contact us through the contact page on this site to receive our emails.

Our Nikki’s Vineyard Syrah 2013 has received further recognition with a silver medal in the Queensland Wine awards 2014.

Receiving the award for Best Queensland Mediterranean Red award for 2013 Vintage as well as a silver medal for Nikki’s Vineyard Syrah 2013 at the RASQ wine show was a gratifying result for us. It is particularly pleasing as the 2013 vintage marked the ten year anniversary of the death of our daughter Nikki who was killed in a car accident at the Stanthorpe southern bypass while on her way to help pick our first vintage. The 2013 vintage was difficult for Shiraz for some Granite Belt winegrowers however Nikki’s Vineyard provided us with a delicious peppery Shiraz.

A bronze medal for our 2013 Merlot was an added bonus.